Note: Eli and Pieta have also written a more approachable primer on this topic, here: “What can go wrong?”: Exploring racial equity dataviz and deficit thinking, with Pieta Blakely..

Last summer, two different clients approached 3iap for help designing and developing DEI-related (diversity, equity, inclusion) data visualizations: one showing outcome disparities in higher education, the other analyzing organizational behavior for signs of systemic racism / sexism in the workplace. These are heavy topics. They require fidelity not just to the data, but to the people behind the data.

And, as we discovered, addressing these specific design challenges also required answering a larger, open research question at the heart of equity-centered dataviz: How do you visualize inequality without promoting it? 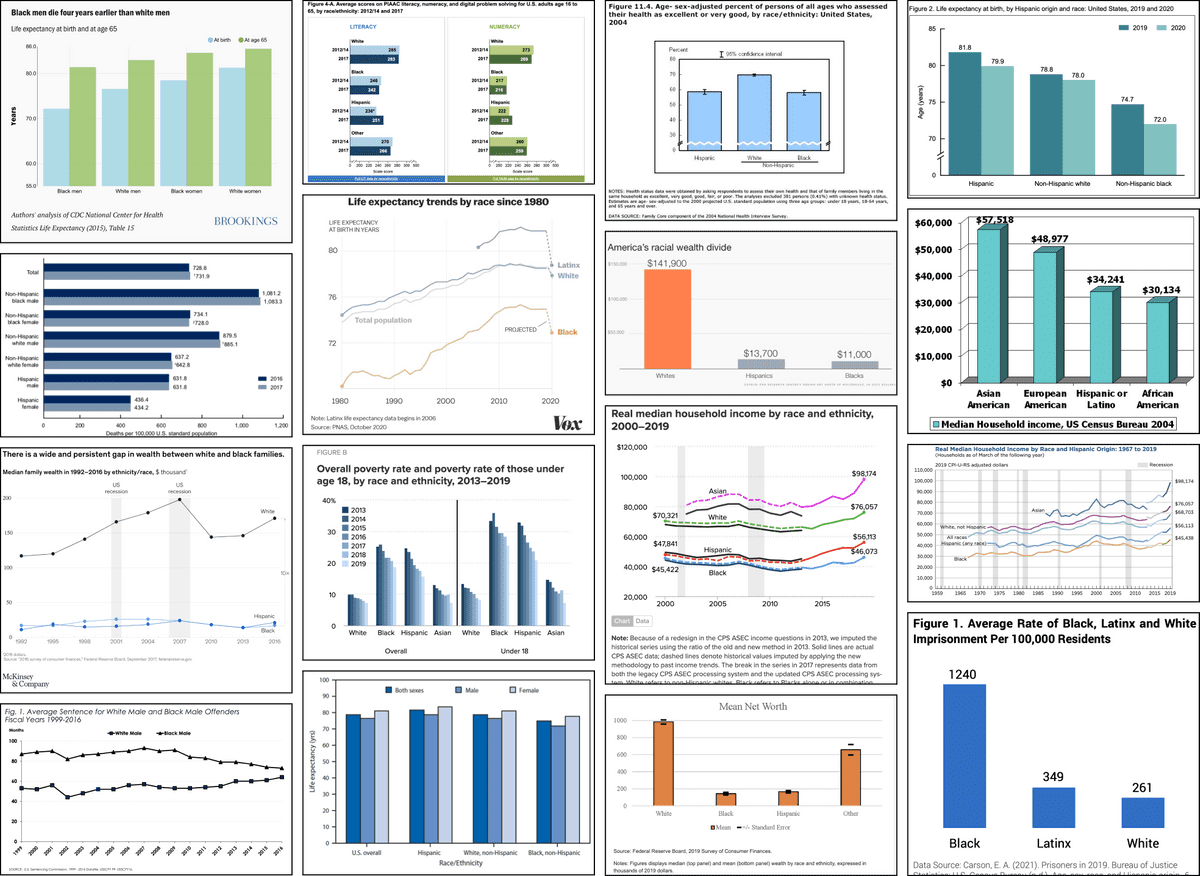 The problem seems simple. To raise awareness about inequality, simply highlight the (stark) differences in outcomes between groups (e.g. income, life expectancy, educational attainment, etc). You might try a chart like one of the above and simply decompose the outcome in question into averages for each group of interest (e.g. splitting the data by race, gender, income, age, etc). As you can see, this is a popular approach!

However, as first noted by Pieta Blakely, when people see charts like the above, they can reach some surprisingly toxic conclusions: They blame the outcomes on the groups themselves, mistakenly assuming that groups with better outcomes are somehow better people (and groups with worse outcomes are somehow personally deficient). In their attempts to highlight outcome disparities, these charts reinforce the stereotypes that make disparities possible.

In their attempts to highlight outcome disparities, these charts reinforce the stereotypes that make disparities possible.

This seemed like a bold claim, especially since charts like the above feel so familiar and intuitive (e.g. “how could bar charts be racist?!”). Others in the dataviz community were skeptical (including myself and at least one of our clients). However, Jon Schwabish and Alice Feng lent support in their authoritative “Do No Harm” guide. And Pieta’s argument is consistent with a wide body of research across social equity, social psychology, and data visualization.

Given the uncertainty, the high stakes, and the ubiquity of these potentially troublesome charts, the issue begged further investigation.

So over the last year, 3iap designed and ran a series of experiments to understand the question empirically. Then in collaboration with Cindy Xiong, of UMass’ HCI-VIS Lab, we analyzed the results and uncovered some compelling findings. We’ve submitted the study for peer review and publication, but we’ll cover the main questions and results here.

The results are summarized below, organized by question. Click a link to navigate within the page.

Is there a plausible pathway between “bar chart” and “perpetuating systemic oppression?”

Practitioners have previously argued (src, src) that charts like the above encourage a form of “deficit thinking” — by emphasizing direct comparisons between groups, they create the impression that the groups with the worst outcomes (often marginalized groups) are personally deficient relative to the groups with the best outcomes (often majority groups).

Stereotyping is facilitated by perceptions of group homogeneity. When we overestimate the similarity of people within a group, it’s easier to apply stereotypes to individual members of the group (src). Unfortunately we’re predisposed toward overestimating group homogeneity for other groups than our own (src, src).

Our faulty judgements about other people reinforce stereotypes. For example, we often attribute others’ successes or failures to personal qualities, even when the outcomes are obviously outside their control (src). (This leads to blaming.) Compounding this, when we observe something negative about a person from another group, we tend to associate similar negative attributes with other members of the group (reinforcing stereotypes) (src, src).

These biases help explain the risks of deficit-framing. By emphasizing between-group differences:

Prejudicial tendencies can be overcome. The more exposure we have to people from other groups the less likely we are to stereotype them (exposure helps us appreciate group heterogeneity) (src, src).

Q2: Measurement: How do we measure a chart’s impact on stereotyping?

How do we operationalize “deficit thinking?” What would an experiment look like?

Example charts used in the experiments. The full set of stimuli are available on OSF.

Each participant saw a chart like one of the above, showing realistic outcome disparities between 3 - 4 hypothetical groups of people. Then they answered several questions about why they thought the visualized disparities existed.

Since the participants weren’t given any other information about the groups of people in the charts, the only “correct” response was to disagree or say “I don’t know, there’s not enough information.” That is, any amount of agreement indicates bias. (As we’ll see below, these “correct” responses were relatively rare).

To evaluate stereotype-related beliefs, we’re mainly interested in participants’ personal attribution agreement. Personal attributions, in this case, indicate deficit thinking, or a negative belief about some of the groups in the chart. For example, agreeing that “Group A did better than Group B because they work harder” implies a belief that people in Group B aren’t hard workers.

External attributions for these charts are equally “incorrect” readings of the data. These would only indicate stereotyping if personal and external attributions were mutually exclusive. Some scholars implicitly argue that this is true, and some studies on correspondence bias assume they’re diametrically opposed, but at least based on our data, this doesn’t seem to be the case. For our purposes, external attributions might indicate a more empathetic outlook (e.g. seeing yourself in another person’s situation) but we mainly use them as a baseline for comparing personal attributions.

Q3: Impact: Is this a big problem?

Do people in the wild actually misinterpret dataviz in ways that are consistent with deficit thinking?

In our last 3 experiments, across all conditions, 77% (542/709) of participants agreed with external attributions to explain the visualized disparities (i.e. they agreed that the results above were at least partially caused by external factors outside group members’ control. e.g. “Based on the graph, Group A likely works in a more expensive restaurant than Group D.”)

The bad news: In those same 3 experiments, 53% (377/709) of participants agreed with personal attributions to explain the visualized disparities (i.e. they agreed that the results above were at least partially caused by personal characteristics of the people in the groups e.g. “Based on the graph, Group A likely works harder than Group B.”).

This supports the hypotheses that visualizing social outcome disparities can encourage deficit thinking. The charts offered no information as to why the outcomes occurred, but still just over half of participants agreed with explanations that “blame” the outcomes on the people being visualized.

Note: Many participants agreed with both external and personal attributions. This implies that the two beliefs aren’t mutually exclusive (e.g. it’s possible to believe that restaurant workers from Group A are harder workers and they work in nicer restaurants). It’s also worth noting again that neither of these conclusions are rational without more information, which the charts don’t provide.

Can the way data is presented mitigate (or exacerbate) audiences’ tendencies to stereotype?

In 3 out of 4 experiments, we found statistically significant differences in personal attribution agreement between the designs we tested. This indicates that some designs are better than others for mitigating the “blame” associated with stereotyping.

This experiment looked at Bar Charts v.s. Jitter Plots. This comparison is important because bar charts (as designed here, without any indication of uncertainty) represent the status quo for how this type of data is commonly presented. So, if we can show that another type of chart gets better results, we can establish that there’s room for improvement. Jitter plots are a good candidate for a “better” design for a few different reasons:

So, for these reasons, Jitter Plots should perform better than Bar Charts. And, based on our results, they do. The next question is why? Which of these factors (e.g. outcome uncertainty, symmetry, anthropomorphism) is most influential? We isolate these in the next experiment.

This experiment looked at Dot Plots vs Prediction Intervals vs Jitter Plots. Whereas Experiment 1 tried to “stack the deck” to test for any difference, Experiment 2 was designed to isolate why some charts perform better than others.

The next question, then, is what kind of “uncertainty” makes a difference? We unpack this in Experiment 3.

In the previous 2 experiments, we show that visualizing uncertainty reduces personal attribution (e.g. Prediction Intervals and Jitter Plots show outcome uncertainty, while Dot Plots and Bar Charts don’t). “Prediction Intervals,” however, represent a different “type” of uncertainty than the more conventional “Confidence Intervals.” Since other research shows that Confidence Intervals bias users in ways that might affect perceptions of group homogeneity, we need to isolate the type of uncertainty that helps mitigate personal attribution.

Q5: Generalizability: Are these results generalizable outside the experiment?

We took several steps to make this more robust:

Q6: Design Implications: What should data visualization designers do differently?

"Neutral" dataviz of racial disparities can be surprisingly toxic. This idea, via @Pieta_Blakely (+ @fleecealeece, @jschwabish's #DoNoHarmGuide) has big implications for equity dataviz and, really, any viz of people.

Pieta and I unpack the stakes here:https://t.co/zSD1ypZSUS