They found that only 41% of participants could correctly answer basic questions about log-scaled graphs (v.s. 84% accuracy for linear-scale).

But the problem is harder than log scales. As you’ll see below, much of “the public” struggle with even the most basic charts and graphs, let alone complex visualizations.

The Curse of Knowledge

A note in the comments stood out to me:

“As a former infographics editor at a major newspaper, I always thought one of my strengths was a lack of math skills. If I could understand a chart, perhaps readers could, too. And yeah, I never used a log chart.” - Robert B.

This raises more questions: How many data journalists think like Robert B.? Or, as Romano & friends suggest, do people in the mass-media “routinely” assume log scale axes are widely comprehensible? If it’s the latter, and they’re overestimating the world’s quantitative abilities, how many other important data stories are lost on general audiences?

I know from personal experience, this is an easy mistake to make. If a big chunk of your day is spent in a python notebook or your lunch conversations often veer toward what’s new on arXiv, you might be in the same boat.

Stanford/Duke professors Dan/Chip Heath call this the “Curse of Knowledge.”

“Once we know something, we find it hard to imagine what it was like not to know it. Our knowledge has ‘cursed’ us. And it becomes difficult for us to share our knowledge with others, because we can’t readily re-create our listeners’ state of mind.” - Chip & Dan Heath, Made to Stick

That is, if you’re highly numerate, it’s often difficult communicating with people who are not.

To cure the “Curse Quantitative Knowledge” and see the world of data through the eyes of a more typical, less savvy audience, we’ll look at 3 different studies that have measured numeracy and graph literacy at scale.

Their general findings are helpful, but to make it concrete, we’ll also look at 10 specific questions from those studies and I’ll provide estimates for 1) how accurately a typical user might interpret them and 2) what % of US Adults would be able to reliably interpret them correctly.

Armed with these benchmarks, hopefully you’ll have a more intuitive sense of how much a story needs to be simplified to be accessible to a wider audience.

When telling stories with data, if you want to make your (hard-earned) insights approachable, there’s no such thing as too simple.

Apparently, babies and rodents are innately able to differentiate simple quantities. Given a choice between two stacks of crackers, babies know to choose the bigger one (src). Rats can learn to press a bar 8 or 16 times to receive snacks (src).

But that’s roughly the extent of our innate abilities with numbers. The rest, including basic concepts such as ratios and negative numbers, are learned.

The PIAAC studies “numeracy” across 38 countries.

Every few years, the OECD runs a large study called “The Program for the International Assessment of Adult Competencies” (PIAAC). It examines basic skills of adults around the world, one of which is numeracy.

The researchers sit down with ~245k people across 38 countries, for about an hour each and quiz them. They calculate their scores on a scale of 1–500, where 500 is a perfect score. Those scores are then bucketed into one of 5 levels, where Level 1 is least proficient and Level 5 is most proficient.

Level 3 seems to be an important threshold. A typical “Level 3” person scores between 276–326 points (src, pg 71). They can answer “Level 3” questions 67% of the time (src, pg 64). We’ll explore examples questions later, but the PIAAC describes Level 3 questions as:

Tasks at this level require the respondent to understand mathematical information that may be less explicit, embedded in contexts that are not always familiar and represented in more complex ways. Tasks require several steps and may involve the choice of problem-solving strategies and relevant processes. Tasks tend to require the application of number sense and spatial sense; recognizing and working with mathematical relationships, patterns, and proportions expressed in verbal or numerical form; and interpretation and basic analysis of data and statistics in texts, tables and graphs. (src, pg 71)

How numerate are US Adults according to the PIAAC?

The United States ranks #28 of 38 countries surveyed in terms of % adults scoring at level 3 or above. (Reproduced from Skills Matter: Additional Results from the Survey of Adult Skills, United States and Highlights of the 2017 U.S. PIAAC Results Web Report)

So if just 4 in 10 US adults perform above Level 3, then 6 in 10 struggle to “recognize and work with mathematical relationships, patterns, and proportions expressed in verbal or numerical form; and can interpret and perform basic analyses of data and statistics in texts, tables and graphs.”

“These results are another signal that many Americans struggle with the most basic of math skills,” says NCES Associate Commissioner Peggy Carr (src).

“But my audience is smart”

It’s good practice and, frankly, respectful to assume a smart, well-intentioned audience, but just because someone is well-educated, doesn’t mean they’re quantitatively savvy.

There is a strong relationship between numeracy and education, but there are exceptions. For example, even among those with more than a high school education, 47% still performed at Level 2 or below on the PIAAC (src).

Rao’s 2008 review demonstrates that even many doctors struggle (src). A survey of family physicians showed, despite 95% of participants affirming the importance of understanding biostatistics, only 25% reported confidence in the subject. Based on their test results, the lack of confidence was well founded: they averaged just 41% correct answers. Granted, biostatistics is a higher bar, but hopefully this illustrates that even advanced audiences aren’t always as advanced as they’d like to be.

How does numeracy relate to communicating data?

Galesic and Garcia-Retamero’s work suggests that, not only does low-numeracy limit a person’s math capabilities, it also correlates strongly with their “graph literacy,” or their ability to interpret charts and graphs (src).

According to their study: “The same meta-cognitive abilities that lead to high numeracy scores also foster good graphical literacy skills.” And the reverse is true: Of the 261 “low numeracy” US Adult participants, only 89 (34%) exhibited high graph literacy.

How will users “read” the data?

Another insight from Galesic and Garcia-Retamero: Graph comprehension isn’t soley based on the reader’s abilities, it also depends on how they’d need to interpret the data.They suggest 3 ways people “read” a graph. A user can:

Each of these levels is successively harder, and this is reflected in their results. US participants could correctly “read the data” in 86% of responses, “read between” in 67% of responses, and “read beyond” in 63% of responses.

Note, these results appear more positive than the PIAAC suggests. To get a better sense of what data-readers can actually handle, let’s look at some of the underlying questions from the 2 studies.

How much complexity can people handle?

To illustrate this, let’s look at some graph comprehension questions & results from the PIAAC, the National Adult Literacy Survey Questions and Galesic & Garcia-Retamero’s “Graph Literacy” study. 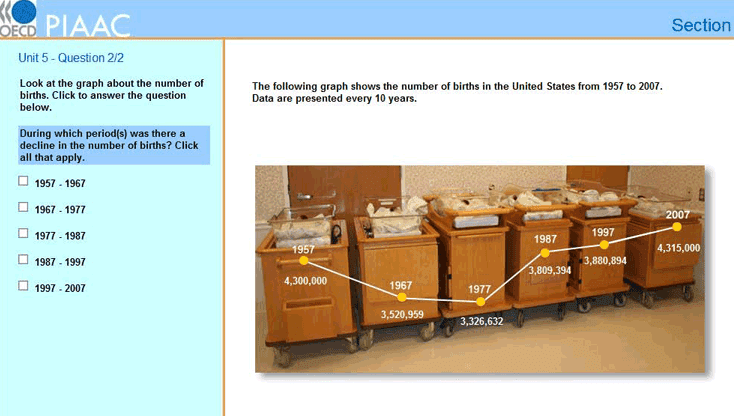 A "Level 3" Question. Only 37% of US Adults will regularly answer this correctly. (Image from NCES, src)

A Level 3 Question: For a time series line graph: “During which period(s) was there a decline in the number of births?” 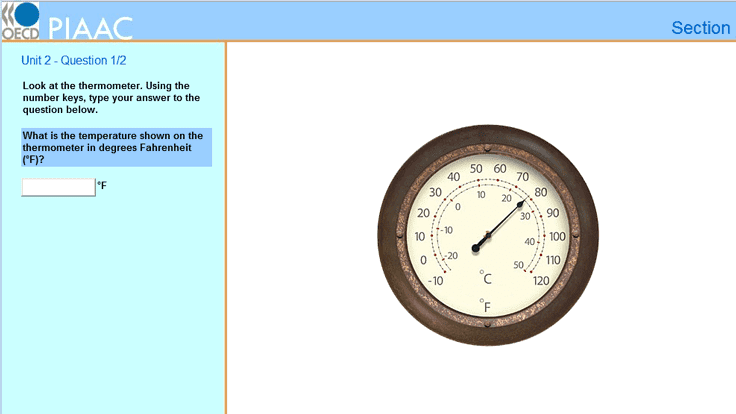 A "Level 1" Question. 92% of US Adults will regularly answer this correctly. (Image from NCES, src)

Questions for a dial thermometer:

(Note: NCES site lists these as Level 3, but the reader companion lists similar questions as “low difficulty” or Levels 1/2) 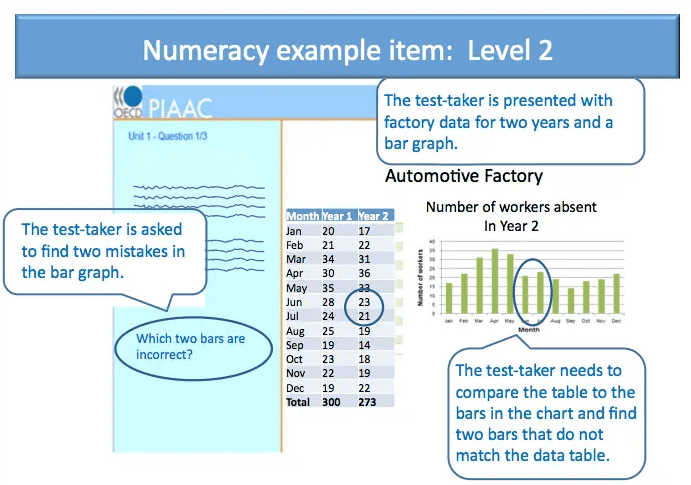 A "Level 2" Question. 70% of US Adults will answer this correctly (via National Center for Education Research)

For a table and bar graph: “Which two bars are incorrect?”

An earlier study in the United States, “the National Adult Literacy Survey,” demonstrates that the average US adult would be able to “identify information from a bar graph depicting source of energy and year” only ~50% of the time. They’d be able to “use a table of information to determine patterns in oil exports across years” only ~25% of the time (src). 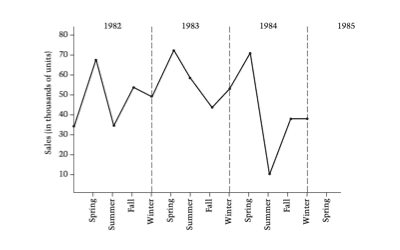 Prompt to a "Level 2" Question. (Image from NCES, src)

Level 2 Question: “You are a marketing manager for a small manufacturing firm. This graph shows your company’s sales over the last three years. Given the seasonal pattern shown on the graph, predict the sales for Spring 1985 (in thousands) by putting an ‘x’ on the graph.”

Prompt to a Level 3 Question. (Image from NCES, src)

Level 3 Question: “Suppose that you took the 12:45 p.m. bus from U.A.L.R. Student Union to 17th and Main on a Saturday. According to the schedule, how many minutes is the bus ride?”

In “Graph Literacy: A Cross-Cultural Comparison” Galesic and Garcia-Retamero tell us “even the simplest graphs may be difficult to understand for many people” (src).

A maybe-numerate lumberjack considers a simple distribution of wood.

Based on these, you can adjust your presentation of the data accordingly. If you know you’re only speaking to an advanced audience, you’re good to go. But if you’d like to reach a wider audience, find ways to simplify.

What can we do better?

Keeping our audiences in mind matters now more than ever. Covid-19 is a tornado of numerical concepts and conditions that people struggle with (e.g. large numbers, exponential curves, politics / emotion, etc). Further, the communities that are most impacted by the virus are also the most underserved in terms of numeracy education. Both of these issues raise the bar for communicators to make their insights more accessible.

So what can we do to solve the “Curse of [Quantitative] Knowledge?”

A look at 3 big studies on numeracy & graph literacy. Still seems crazy to me that even the simple visualizations we take for granted (e.g. line graphs) are tough for ~30-60% of people in the US. A few surprising examples... 1/nhttps://t.co/d60pm5zd9I